Got a camera phone, scanner or digital camera? Then post your piping pictures here. Just be aware that that any inappropriate pictures will be dealt with a severe lack of sense of humour.
Post Reply
5 posts • Page 1 of 1

Well I went to the William Kennedy Piping Festival in Armagh and saw and heard lots of wonderful piping. I thought people might be interested to see some Czech 'duda'. I was able to have a go and, after learning a couple of tunes (on the fiddle) was asked to join in a performance.

As well as my pictures, you can see many more on the Armagh Piping Club website at:
http://www.armaghpipers.com/wkpf/archiv ... lery/index

me attempting to play the duda, but you cab at least see the bass drone
czech pipe.jpg (26.03 KiB) Viewed 9209 times 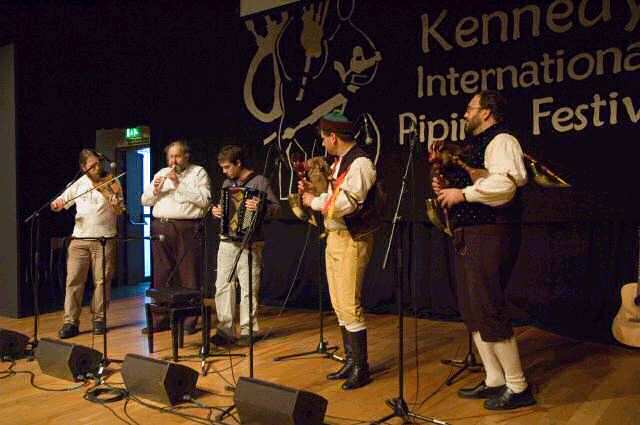 me and two others performing with Martin and Josef
czech ensemble.jpg (31.7 KiB) Viewed 9209 times

better sharp than out of tune
Top

those look neat! What were they like compared to the bagpipes?
"Make a joyful noise unto the Lord, all ye lands!"
Psalm 100:1
Top

You mean, 'What were they like compared to HIGHLAND bagpipes ?' I take it.
They were VERY different not only because they are belows blown, but also because the bellows is under the left arm and the reservoir under the right - the opposite of uillean pipes for example - and so disorientating. In fact it created a bit of an 'on the sea, in the waves' sort of feeling, particularly as they can be played standing up - you find yourself swaying slightly. Traditionally the bellows/bag arrangement could be either way, though.
This obviously made it hard to maintain constant pressure while playing a chanter with slightly different fingering. To be honest I didn't have long enough to try and adjust.

The chanter plays in E flat, so is a few tones higher pitched than we're used to, but matches 19th century oboes played locally.

The volume is less than we'd be used to too, but loud enough for indoors or outdoor areas that are not too loud - or for playing with other instruments.
better sharp than out of tune
Top

that's interesting.
thanks
"Make a joyful noise unto the Lord, all ye lands!"
Psalm 100:1
Top