Got a camera phone, scanner or digital camera? Then post your piping pictures here. Just be aware that that any inappropriate pictures will be dealt with a severe lack of sense of humour.
Post Reply
5 posts • Page 1 of 1

Daughter and I with pipe loving dog and a broken leg, tuning up for our 0030 am New Year tour of the neibourhood. 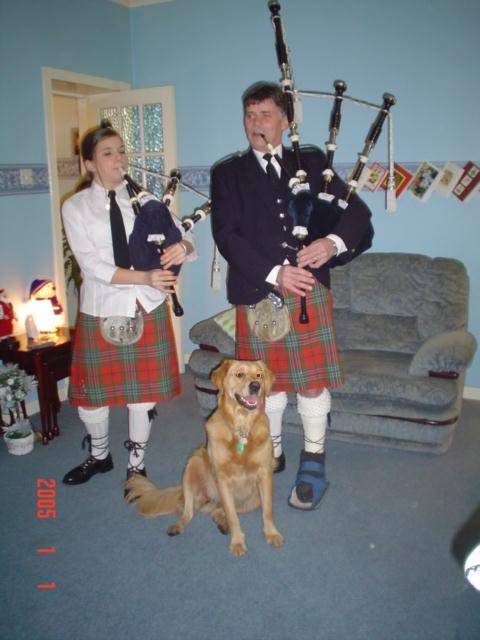 I do two kinds of birl, one on the pipes, and one before collapsing.
Top

What tartan are you wearing? In this picture it looks similar to our band's - Maclean of Duart.
Top

Yes, your quite right. Its MacLean of Duart.
Infact, its Shotts and Dykehead's old kit. They had to change to accomodate their new sponcers - House of Edgar.
I've secretly hoped that some of the previous talent that wore it would rub off on me.

I do two kinds of birl, one on the pipes, and one before collapsing.
Top

Nice ghillies John! Or are they baffies?
Top

By the look of it this is the Ancient MacLean of Duart, this is what I wear
Top
Post Reply
5 posts • Page 1 of 1