Got a camera phone, scanner or digital camera? Then post your piping pictures here. Just be aware that that any inappropriate pictures will be dealt with a severe lack of sense of humour.
Post Reply
8 posts • Page 1 of 1

Photo from the funeral of CPL David Unger at Ft Leavenworth, Kansas. David was killed in Iraq 18 October 2006. It was an honor to be asked to pipe at this funeral. 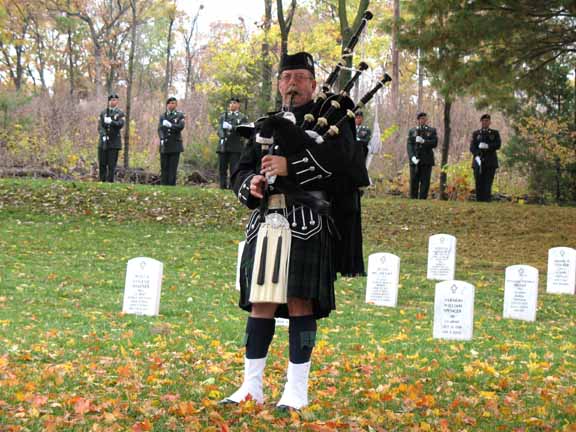 Respectfully Nice. Been doin alot of them myself. That's why it was nice when 6-6 Cav ask me to pipe thier Spur Ride, it was a nice change to play Garry Owen rather than Amazing Grace. I retire in January, so I will be doing more volunteer work. It's ashame that every Division doesn't have a piper. That riduculous automatic bugle thing is shameful. If I would have died in Iraq this last time and they couldn't find a piper, I would have rather they had a band of gypsies and fiddle to dance around and play then that electronic bugle. Back in my Marine Corps days, we always had a piper for about everything. Keep up the good work, Rob.
To save a life. Anyone, anywhere, anytime. Auxilium Cito.
Top

I see angry rob shares my take on the electronic bugles. Disgraceful!
Top

It would be nice if between the Base Cmdrs, SAMS, VFW, AMVETS, Legion, etc... if we could get a fund together and some coordination to have a sponsored and designated military person on each post to pipe. One of the ceremonies on FT Drum had a boom box recording of Amazing Grace and it just sounded cheap. If the local veteran chapters could collect a fund and make some coordination with the the base commanders, we could have a sponsorship for a Joe who could play ceremonies. And what I mean by a fund is materials and maybe even a Permissive-TDY or two to a school. I seen the Marine Corps do this before, leaving a couple of thier pipers go on PTDY to Scotland and get some more training. Yeah I know-Now that I got on my soap box I am going down to the local VFW (yes, I'm a member) and see if I could get some support. It's the least I can do since I'm retiring. I just had my Part II retirement physical and the Doc said that I need to believe in taking pain meds (I don't take any), what does he know? I've maxed out all of my PT test except for three in 22 yrs of service. I'm going to do my therapy, and it involve hiking boots and a set of pipes and a some peaks in the Adirondacks. Last one I played on was Algonquin. Enough rambling, Rob.
To save a life. Anyone, anywhere, anytime. Auxilium Cito.
Top

being a marine myself i understand how important services are and how they should be real and now played from a speker, i had the honor to play a memorial service in iraq, for the suger bears squadron from alaska, they had 4 men die in a helo crash. i was playing for them the night that it crashed which was fortunitly about 5 days befor they posted it live coverage on cnn

and thier csm heard me playing on my bunker (pic in piping over the sands of iraq) and came over and asked me to play at the service, had to be the best thing ive everdonein that country.
Top

Man, I just got back from the Marine Corps League meeting and it looks like I have a Christmas parade. Tommorrow morning I have a dedication ceremony for an aircrew that went down and then at the end of the month another ceremony for 11 of the 10th MNT Soldiers that didn't make it back. Always an honor to do, but depressing. When I was down range I spent more time saving lives.
To save a life. Anyone, anywhere, anytime. Auxilium Cito.
Top

Way to go Rob!!! As a former Marine and Novice piper, I am wanting to do something to pay honor to our servicemen and women. I am going to join the Marine Corps League or the American Legion and start learning the pipes again so that I can play as you did in remembrance of these heroes.

Don't you Marines have your own Pipe Band? I'm sure I've seen a newsletter a few years ago. Would it be possible to have one of those guys available to play at a moment's notice? Or are there just too few members?

Sadly, I think there will be a need for some considerable time to come.